This sub-strategy addresses the range of government interventions and support programs that are needed to realise the vision for a vibrant community energy sector.

Foster a policy and regulatory environment that proactively removes barriers to and supports the growth of the community energy sector to reach its full potential.

8.2.1 Work to ensure there is strong and stable renewable energy policy.

Stable and supportive policy is essential to the growth of the community energy sector, particularly allowing community energy models to evolve from a concept to widespread replication (see Appendix D).

In Australia, the main policy mechanisms that have supported renewable energy including community energy are the Renewable Energy Target (RET). Legislated agencies such as ARENA and the Clean Energy Finance Corporation (CEFC), or similar equivalents, have the potential to play a significant roles as the community energy sector evolves. As such, it is in the interests of the emerging community energy sector that these policies and supporting organisations be maintained and strengthened. The RET was found to be particularly critical to the economic viability of all investment based models of community energy (refer to cost modelling in Appendix F), even though community investors may be willing to receive lower rates of return than institutional investors. A 30% decline in RET-driven income results in an average 11% reduction in total project income for wind projects, and 6% reduction in total project income for solar projects, which has a critical influence on financial viability of these models.

8.2.2 Support projects in gaining access to electricity networks at a reasonable cost and timeframe.

The current grid connection approval process for distributed generators above the ‘deemed’ connection limit of 5 or 10kW is often onerous, unclear, provides no certainty for proponents and offers limited effective means of negotiation or appeal.

This results in community energy projects:

Analysis underpinning cost modelling (Appendix F) indicated that grid connection can add significant cost to community wind models. For example, grid connection is currently anticipated to account for 18% of the upfront monetary costs of New England Wind. For Hepburn Wind, complications associated with being the first wind-farm to connect to the distribution network led to an additional unforseen $300,000 in extra technology costs, and $600,000 in lost revenue due to being constrained for the first months of operation.

This problem restricts the capacity of consumers and communities of all scales to invest in distributed generation.

This priority involves advocating for grid connection processes for community energy projects that is timely, efficient, cost reflective, standardised, accessible, transparent and where proponents have recourse to effective arbitration when negotiations fail. 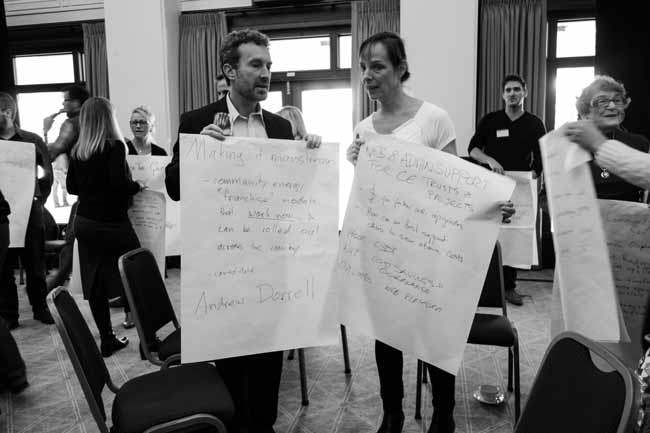 While historically electricity network infrastructure used to be owned by regional cooperatives or local governments, now across Australia they are owned and managed centrally by either private or state government owned businesses. As such, the rules governing networks are no longer set-up for local ownership. However, research shows that:

“Stand-alone power infrastructure can be locally owned and locally managed, with positive flow-on affects for local economies, particularly in regional areas that may suffer from poor power quality or unreliable supply. The risk of high energy prices for regional customers, which can be the result of more cost-reflective tariff structures, can also be proactively managed by transitioning to stand-alone power solutions or micro-grids. This will also help un-wind historical cross-subsidies from city to regional customers, reducing upward pressure on power prices for all.” 2

As such, this priority initiative will help create the regulatory structures that enable and do no hinder community off-grid or micro-grid systems, including investigating the potential for communities to buy-back their grid.

8.2.4 Promote rights for projects to sell energy at a fair price.

This priority initiative is about creating the conditions whereby community energy projects are able to sell the energy they export to the grid for a fair price. Community renewable energy projects are restricted to four suboptimal options for selling energy:

This priority initiative is about working out how to best ensure that community energy projects can secure a fair price for their electricity.

8.2.5 Advocate for rules that would make it easier and less costly to secure community investors

The majority of community energy models are based on the idea of many small community investor-members, however current regulations, specifically the Corporations Act makes it very difficult. In particular, small (<100kW) behind the meter solar projects with many community investors are not economically viable. This is because the compliance cost and requirements for projects with more than 20 investors contribute to making community energy projects financially unviable. For medium scale projects that are viable, this item can represent the one of the most significant project development and ongoing cost factors increasing overall monetary costs or volunteer time commitments (see Appendix F). Example requirements include, but are not limited to restrictions on public offerings and advertising without a costly prospectus (known as anti-hawking provisions, see Section 734 of the Corporations Act) and possibly needing an Australian Financial Services Licence (see 911A of the Corporations Act).

The authors of this strategy understand that the compliance requirements and thresholds within the Corporations Act and the Cooperative National Law for example are done to protect consumers from ill-conceived or unscrupulous/predatory investments. As such, this priority initiative will involve the development of ideas including possible exemptions that would both address the cost prohibitive nature of compliance requirements for community energy groups while still protecting consumers. This priority initiative will work alongside the shared infrastructure platform initiative in the Finance and Funding sub-strategy, which looks at ways to address these issues, within the current regulatory framework.

Internationally, the UK and US have both reviewed their laws looking at small community equity investments in many types of projects. Specifically the US has granted an exemption to certain provisions within these laws to Mosaic, a solar equity/investment-based crowd funding platform, while in the UK exemptions have been granted to Abundance Generation. Thus while these organisations’ operations are still regulated ensuring investor/consumer protection, the costs to community energy projects are lower.

Specifically, this priority initiative will look to input into the ongoing process exploring equity crowdfunding. Already a number of community energy groups and support organisations have provided submissions to the Corporations and Markets Advisory Committee’s (CAMAC) Review of Crowd Sourced Equity Funding in 2013. This priority initiative will facilitate community energy stakeholders to continue to input into the ongoing policy discussion that resulted from the CAMAC and a subsequent 2014 review.

8.2.6 Work with State and Territory Governments to develop programs to support community energy.

The NSW Regional Clean Energy Program (RCEP) has been a significant champion for and driver of community energy in NSW and in Australia more broadly. The RCEP consists of a central team and six regional coordinators who support clean energy uptake in their regions, with an increasing focus on community energy projects. In addition to staff support the RCEP has coordinated two community energy grant programs and has funded a number of priority initiatives, such as the development of the Community-Owned Renewable Energy How to Guide. In the ACT, the Environment and Sustainable Development Directive (ESDD) has also supported community energy projects through funding and a wind and solar reverse auction.

The cost modelling exercise (Appendix F) revealed that more than half of the operating models of community energy received government support to get their first projects off the ground, and thus can be considered a common feature of success.

This priority initiative will involve determining which of a range of policy levers to support and incentivise community energy projects are most appropriate, which jurisdiction (a local, state, territory or federal government) is most likely to institute the policy and will most benefit community energy groups and then work to implement the chosen policy mechanism. Such policy mechanisms could include:

This priority initiative is a subset of #4 ‘Promote rights for projects to sell energy at a fair price.’ Currently community energy projects are only financially viable if they are mid-scale and compete on the wholesale market, have a Power Purchase Agreement (PPA) or if they operate ‘behind the meter’ (such as community solar on commercial sites), attracting close to retail value for their generated energy. This restricts projects to specific sites with sufficient available load, and limits the opportunities for community energy projects to sell energy to their members. Virtual Net Metering (VNM) is a proposed arrangement that would overcome this barrier by allowing distributed generators to sell their ‘exported’ electricity generation to other nearby sites, using a smaller charge the use of the local grid. In doing so it would provide distributed community energy projects with a fair price for the energy they generate and export to the grid., and a direct contractual connection with members or other local buyers of the energy. The initiative involves the identification and development of specific methodologies to value the contribution of local exports to the electricity grid, underpinned by the principles of cost and value reflectivity. The ultimate goal of this initiative is the development of a Rule Change Proposal to allow VNM on public electricity grids, which would see appropriate charging for local use of the system, and a new business model for electricity networks into the future.

8.3 Background to the objectives and priority initiatives

This sub-strategy encompasses priority initiatives that:

These are three roles that governments can play in helping to meet the vision for a vibrant community energy sector. It is hoped that a range of government departments and policy makers from across Australia will use this Strategy to inform the development of community energy policy. However, this sub-strategy is framed for community energy advocates and actors, acknowledging that non-government actors will play a significant role in putting community energy on the policy agenda.

Governments across the world are recognising the unique opportunities and benefits presented by community participation in sustainable energy deployment. Countries such as Germany and Denmark have had policies in place to incentivise community renewable energy for decades. Others such as Japan, Thailand, the US and Canada have introduced similar policies more recently.

As such, there is a growing rationale for policy support for community energy that actively helps mainstream a community approach to sustainable energy.

In order to understand how the objectives outlined in this sub-strategy can be achieved, it is important to understand the different types of regulatory reform and policy mechanisms available and which jurisdictions or agencies can implement them.

In the context of this strategy regulatory reform refers to processes that change how our electricity and gas systems and markets operate. The key actors in this reform process are:

The Community Energy Advocacy Strategy outlines in detail the role of each of these organisations in creating regulatory reform. While policy reform relates to a range of mechanisms that governments at all levels can institute, that are not specific to the National Energy Law and similar targeted pieces of legislation and subordinated Rules. The policy reform that this sub-strategy focuses on are those that state and federal governments could deliver to support community energy rather than at a local government level.

In a recent Strategic Review5 for the NSW Government three main categories of policy support for community energy were identified:

The main mechanisms of regulatory reform available are:

These mechanisms for policy and regulatory reform need to be carefully considered when the priority initiatives outlined in this sub-strategy move to the planning and implementation phase.

For more information relating to and underpinning the Policy and Regulatory Reform Sub-Strategy, see: